So, a few personal reflections about Wikipedia. Does it contain glaring errors? Of course, but not as many as you think!  Studies have shown it to be 99.5% accurate.  And here’s the surprise – normal encyclopedias have glaring errors as well! If you have some extra time, which I’m sure must be just laying around given that you’re a graduate student, check out James Loewen’s Lies My Teacher Told Me. Completely illuminating about history textbooks.

Does the contributory nature of Wikipedia change how we look for, access, and consume information? Absolutely. How many times have you searched Wikipedia to find a quick answer that you were reasonably sure would be accurate. Wikipedia is actually an apt illustration itself of disruptive innovation, and indeed it is a model of the contributory nature of the web and informal learning. But that’s a whole different topic.

Wikipedia’s “About” shares that:

Since its creation in 2001, Wikipedia has grown rapidly into one of the largest reference websites, attracting 470 million unique visitors monthly as of February 2012.[1] There are more than 76,000 active contributors working on more than 31,000,000 articles in 285 languages. As of today, there are 4,521,648 articles in English. Every day, hundreds of thousands of visitors from around the world collectively make tens of thousands of edits and create thousands of new articles to augment the knowledge held by the Wikipedia encyclopedia.

Crazy right? In the immortal words of Brittany Spears “I got your crazy”. A wildly successful concept bringing contributory knowledge to the world. Citations are needed as well as supporting links to demonstrate that any given topical article is truthful. Any article missing references comes with a giant disclaimer warning. So they’re not just for car commercials anymore 😉

Seriously Though, What is Wikipedia’s Definition? 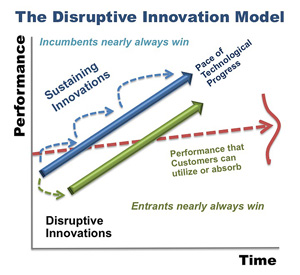 A disruptive innovation is an innovation that helps create a new market and value network, and eventually disrupts an existing market and value network (over a few years or decades), displacing an earlier technology. The term is used in business and technology literature to describe innovations that improve a product or service in ways that the market does not expect, typically first by designing for a different set of consumers in a new market and later by lowering prices in the existing market.

But don’t take my word for it. Read the rest of the article HERE. Seriously though, read the next few paragraphs. It’ll take 10 minutes tops.

And now, Hear What Clay Christensen Has To Say